In case you wondered why I didn't update my LJ for several weeks (and rarely said something on Twitter, either): I was busy editing last year's vacation video. I won't link it here, it is mostly personal stuff and the quality of the footage is rather poor, but it was a nice exercise to learn editing. As Kdenlive still isn't suitable for such a large project (but progressing quite well currently,) I had to resort to a non-free editing solution. Adobe Premiere Elements did the job amazingly well, at least I didn't miss any feature of the professional version. Granted, as a 32 bit application it runs out of memory quite often with such a comparatively large project, but I've seen much worse behaviour of much more expensive software. The movie had more than 700 774 clips on the time line in the end, and runs for 94 minutes. 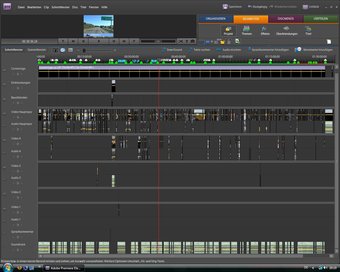 The built-in DVD menu generator is not so useful: You can only slightly modify the pre-defined templates, unless you peek around a bit in the file system and discover that those are actually multi-layered Photoshop project files. I purchased the bundle with Photoshop Elements, thus I was able to modify a template a bit more, however opposed to Premiere Elements, Photoshop Elements is lacking some crucial features like guard lines (you can see but not create or move them) and some effects aren't directly accessible (you can "copy" them from some existing project, though.) I ended up installing The Gimp on the Vista system for the other graphics needed.

PRE's built-in export modules for DVDs and H.264 are broken. This is one frame from the DVD
generated by PRE: 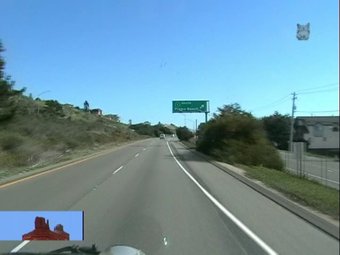 The (animated) caption is wrong, here's a close-up:

The vertical black line next to the blue box is in any export via the "distribute" menu. A DV video export does not have this artifact:

What now? Well, reboot to my usual openSUSE Linux desktop, grab some multimedia conversion tools from Packman and convert the DV file with ffmpeg. Et voila:

Unfortunately, FFmpeg is currently a bit too restrictive regarding DV AVI files generated by Windows. I get literally thousands of messages like AC EOB marker is absent pos=64. This is being tracked as issue 1060 by the FFmpeg issue tracker, but not resolved yet. Don't think that MPlayer's mencoder would do any better: it relies on FFmpeg for reading DV files. Additionally, it crashes before it could finish conversion. What now? Extracting video and audio with tcdecode from the transcode package does work, but I wasn't able to multiplex the streams again, as the current version of ffmpeg seems to ignore -itsoffset and transcode insists on re-encoding the whole video...

A colleague mentioned Avidemux a while ago, and indeed: it is able to rebuild the stream without re-encoding its content. It also is able to encode to other formats, so I had some well encoded MP4 files very quickly. And it can even create MPEG2 streams suitable for DVD authoring! Or so I thought. Well, the lavc encoder sure has excellent compression, and it looked very well on the computer screen. However, my DVD player didn't like the stream at all. Apparently, it swapped the half-pictures, despite using the correct options. Mplayer and vlc don't care about it (in fact, they don't even recognize that something is wrong), so I had to rebuild the track again with FFmpeg after I was done with the menus and mastered the first DVD. Ugh. Hint: use single pass encoding to check whether it works at all, and afterwards recreate the stream with two-pass encoding. But don't fix the chapter entry points before you've created the final stream, as the start of the GOPs will change and FFmpeg cannot place GOP starts at pre-defined times.