After starting early with a Lufthansa Regional flight from Nuremberg to Frankfurt, I met f_u_r_v_a_n, KayJay and Lynard_ in Frankfurt. The US-Airways flight to Philadelphia with an A330 airbus was very calm and nice. Unfortunately, there was no entertainment program during the connection flight from PHL to San Francisco and we even had to pay for water during the five hour domestic flight, but the staff was friendly and competent. We even arrived half an hour early.

We got our rental car, drove to the Ocean Park Motel and checked in. The motel was San Francisco's first motel, built in the 1930th in Art Decor style, and still a family business. It is located one block from the zoo and two blocks from the ocean beach. Our room is clean, large and nicely renovated. Certainly not a cheap motel, but worth every dollar. We went to breakfast at a nearby diner, which was not only excellent, but also has a very warm and friendly staff. 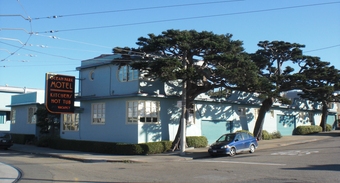