The year's Further Confusion was a pleasant surprise after last year. Granted, I didn't expect anything at all this time — too many regulars were not able to attend, mostly those who were important contributors to FC's unique atmosphere. They were dearly missed, indeed. I heard several voices blaming the Fairmont for lack of atmosphere, but it's the guests that make a convention, not the hotel. In fact I only had few issues with the hotel, mostly with the slow bar service, which on Sunday ignored us completely. The majority of the hotel staff was very lovely, at least to us. But even with many of our friends missing, something was back: the FC spirit. A bit weak, but definitely there.

Thanks to FC being on the MLK weekend, the ice rink between the hotel and the museum was a great attraction for fursuiters. Alas, near impossible to photograph as the rink was quite elevated from the floor with a high fence. 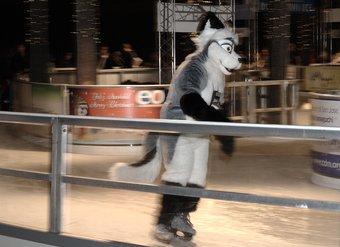 The stage shows were entertaining again, even though doing the robot at dance contests is getting old after the third act in row. The ad-lib segment between the masquerade and the results of the jury was probably too long again and too childish, but the masquerade had some very nice costumes on stage again. While FC:Unleashed was a bit short, I liked the acts (and for once agreed to the jury decision). Reciting, no: acting beatnik poetry on the stage of a fantasy convention is certainly original, watching such a perfect performance totally unexpected.

Even the fursuit destruction derby, excuse me: the Critterlympics were funny as hell, mainly due to several participants trying to sabotage the event.

The SIGs were mostly uninteresting to me, except spottacus' serval presentation. He brought some really nice cats, like this handsome serval: 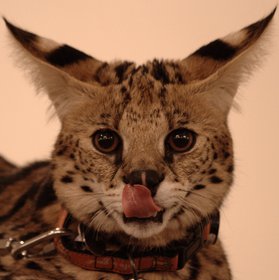 Many thanks to the Sainte Claire hotel for providing the conference room!

And of course there was a lot of fursuit action in and around the hotel, and some great interaction with the locals. 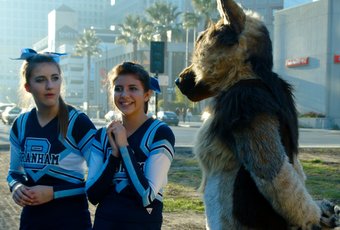 I missed nearly all dances as I was too tired at the end of the days. The dead dog party was quite nice at the beginning, but after a while DJs who never look up from their CD decks took over, playing rather unbearable music. The fursuiters fled to the hotel lobby, and we were having a lot of fun there instead.