As I came home Thursday night I couldn't open the door to my flat anymore: the dead bolt snapped back, but the latch didn't. Luckily I was able to remove the escutcheon plates and turn the axis of the spring bolt with the Leatherman. Now quickly to the hardware store before it closes and buy a new cylinder lock. And new escutcheon plates. I didn't take into account, though, that not only the cylinder lock was non-standard, but also the mortice lock. I had to google how to remove the cylinder, and the mortice lock does not take a standard cylinder lock. Dismantled, the system looks like this: 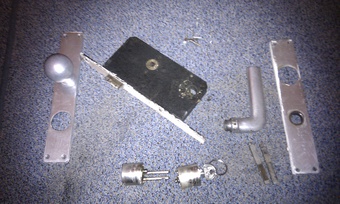 Also, the special system made it impossible to measure the required lengths correctly. The plates were the wrong ones, the hardware store closed already, I had to somehow keep the door shut for the night.

There, I fixed it

Later that night it dawned on me that it was the mortice lock and not the cylinder which was broken, and that I might as well could have saved myself the trip to the store.

The next morning I went to the hardware store again, exchanged the plates for the correctly sized ones and bought a new mortice lock. At least the cylinder lock had the right length. After some adjustments to the door for the new system I was able to mount the new lock and finally have a correctly opening and lockable door again. 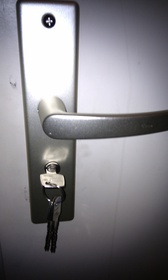 New lock, inside the flat

The new plates even match the ones on the door across the corridor.

¹ Ironically, the bored cylindrical lock was invented by a German locksmith.

There, I fixed it

Sometimes the simplest solutions are the best!

Though shall not open it ;) Glad to hear you could fix it

And I admit, for those reasons walking around with a leatherman and other tools IS a life-safer. I personally just can't get used to carring that much stuff, dragging my pants down.