Sacramento, a city (actually, two cities) along the Sacramento and American river, is the capital of the state of California.

After the futile attempt to get a parking space at the lots listed on the web which supposed to have oversize parking sites, we met Dick, an Nth degree cousin of my father or so at the parking lot of the railway museum. It actually has a couple of spaces for RVs, however those are far too small for our model. After some discussion with the park warden and the manager of the parking lots where to park the RV, they assigned us one of the mid-term spaces for tour buses. For free, even. Just pester the folks long enough and you get more than you asked for. ;-)

Old Town Sacramento is actually quite nice. In winter. In summer it likely is as overrun as San Fransisco Fisherman's Wharf, I'm afraid. I bought two T-shirts there. We also went to the California State Railway Museum, which is a must for every railway fan. Many steam engines and wagons, however only one old diesel-electric engine. Afterwards, we had lunch in a very nice restaurant by the river.

After lunch, Dick had to leave and we went to the state capitol. 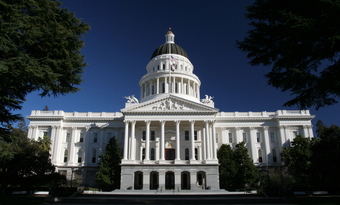 A nicely renovated building, with a large park, including many memorials. We also visited the catholic dome. Not quite as impressive as the large old ones in Europe, but well-balanced architecture and interior.

Overall impression: Sacramento is a nice, not too large city with some great architecture and the unique Californian relaxed atmosphere (I think the tram blocking a major crosswalk for more than ten minutes goes a bit too far, though.) Certainly worth a second or third visit.