Having skipped Further Confusion this year allows us to visit a different furry convention in the US. We are: Kayjay, Lynard and me spending a couple of days in Seattle, joined by Furvan, Tioh, Mendra and Zefiro at Rainfurrest.

I took the first tram of the day to get from my flat to the station hopped on ICE 822 to Frankfurt Airport. Lynard arrived shortly after me, followed by Kayjay. We got aboard LH402 to Newark and took off in time. The Boeing 747 was quite new, but the seat distance in cattle class got even smaller. I was able to live with the fact that my in-seat entertainment system offered only one Bollywood movie, as I refuse to watch movies on the tiny screen anyway. Everyone else hat a large collection of movies to choose from. The flight itself was calm, we landed almost on time in Newark, but it took the usual 15 minutes to get to the gate. Immigration was crowded, partly due to some technical problems with the fingerprint database. Even though we were offered to jump the line due to our short layover time, I arrived at the baggage claim three minutes after boarding of our connection started. Kayjay arrived shortly after me, but Lynard had to wait what seemed to be an eternity in Second Inspection. Not much of a problem as we missed our connection anyway. We got rebooked to the first flight to Seattle for the next day and checked in at the Best Western Newark West. At least the bar had Yuengling Lager, which made the evening acceptable.

After getting up at an ungodly hour we went to the airport, checked in and got aboard a United flight to Seattle. A six hour flight that required extra payment for the entertainment system (WTF?), and the cabin crew going through only twice with beverages... At least it was a mostly calm flight. We arrived in Seattle on time, got our luggage and picked up the rental car. Since we were way too early to check in we started with some shopping. Best Buy have reduced both their selection and stock even more, Fry's has a lot of empty shelves and none of what I wanted to purchase. We eventually made it to the hotel, after swearing at the GPS and the large amount of construction work in Seattle.

We stayed at the Best Western Executive Inn one block away from the Space Needle and got a room with a view of it.

The View from the Hotel Room

The rest of the day was spent riding the monorail and exploring Pikes Market and the waterfront. Pikes Market is a mix of Farmer's Market, tourist traps and small speciality shops. Similar to what Fisherman's Wharf in San Francisco used to be years ago, but larger and more colorful.

I just had to buy another pay of toe shoes... So we went to REI, a large outdoor shop very much like the German Globetrotter chain. Their Seattle store even has a small park in front of the building so you don't realize it at first. Since it was nearby, we drove to the Japanese Tea Garden in the Arboretum park, swearing a lot again about the detours caused by road construction on the way. This tea garden seems to be more authentic than the one in San Francisco and has a more organic feeling. Very much worth the visit. 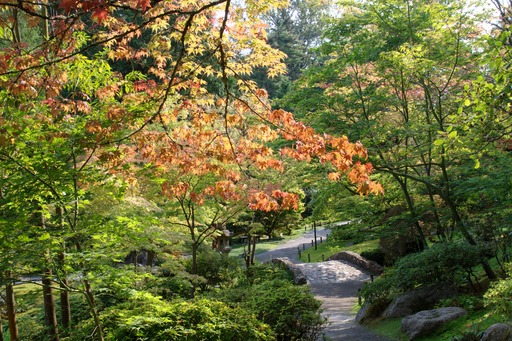 And since we were already there we took a short hike at the Arboretum with its countless different species of trees, where I had the chance to use the toe shoes on a more natural ground.

The shoes stayed on, we went back to the hotel, took the monorail downtown, and got a T-Mobile SIM with a prepaid plan so we can have mobile Internet access. Then we explored Downtown Seattle even more until dinner at Red Robin. Having had our burger on the patio at the waterfront, we drove back and went to the Space Needle. The view at night from up there is simply breathtaking.

Woodland Park Zoo is a bit North of Seattle. It is relatively large, has several aviaries, but they propably overdo it with the vegetation. It is sometimes really hard do get a good view of the animals. The staff is very nice though and gives demonstrations at various places throughout the zoo. 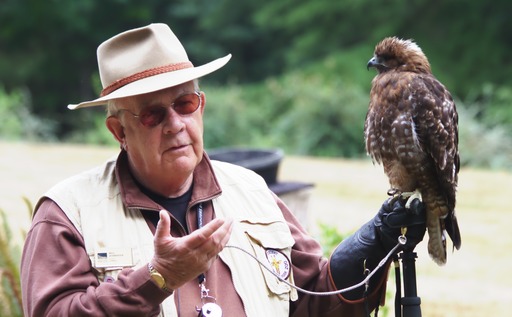 Falconer at the zoo

After a small detour into University district for a coffee, we drove to Kerry Park for a couple of photos. 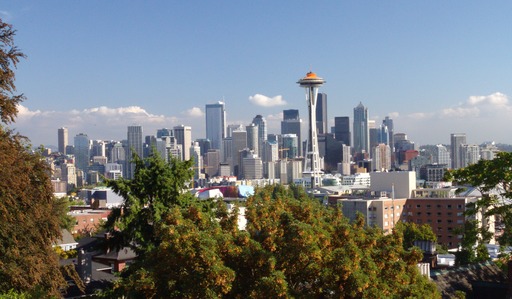 Back to the hotel to park the car, another ride with the monorail, confusion about the underground bus system, and then Occidental Park with its sculptures. Unfortunately, the light wasn't really good for photography, so we just wandered around Pioneer district, visited China Town (and made a mental note to try the restaurants there next time), back to Pioneer Park, and finally dinner at Cafe Bengodi.

The EMP is a large museum for music and pop culture next to the Space Needle. Their guitar collection gives a great overview about how guitars changes over time, especially the electric guitar. Both the exhibition about Jimmy Hendrix and Nirvana are great to learn more about how both have influence rock and pop music and pop culture in general, while showing from where the artists were coming. There are two great exhibitions in the basement, one about horror movies with exhibits like the original "Slaughtered Lamb" pub sign of An American Werewolf in London, an Alien costume, or a Critters hand-puppet. The other is about Science Fiction in general, with several original costumes and props from Star Trek, a Stargate mask, Neo's coat from The Matrix, and much more. Quite impressive, but I was missing information about the designer, builder and building materials.

Afterwards we walked to the sculpture park near Pier 70 and then North on the Elliott-Bay-Trail along the waterfront to Centennial Park and Kinnear Park. On the way back we had dinner at Roti Cuisine, an Indian restaurant which was great. Even got a couple of used CDs for cheap at Easy Street Records. Finally, when we got back to the hotel I wrote this report and started to pack my bags, as the next step on our journey will be Rainfurrest. 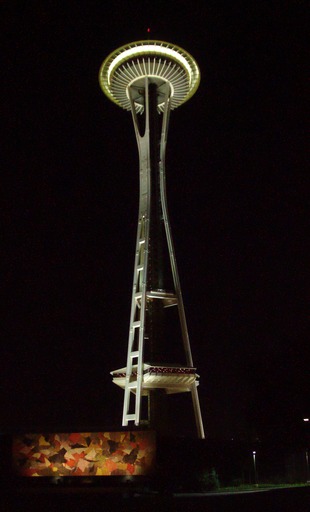 Space Needle, from other side

Enjoy your stay!
here is a great song about Seattle!