And this is the final part of my vacation report.

I didn't know Eureka had a large mall, even one with some independent stores, and the only I've ever seen with a Walmart as an anchor store. Mendra was looking for a game store, which apparently has moved, I actually found two CDs and a BD at f.y.e., and we almost had to use physical force to get Zefiro out of the store selling old arcade game machines. We drove downtown for a toy store, while the dragons were looking for a game console and dragon plushies I had the pleasure to have an excellent burger and shake at Fresh Freeze, a former drive-in restaurant on F Street, corner Harris Street.

The rest of the day was spent on the road, a scenic drive down the US-101 and the CA-1. The Northern part of the CA-1 is described as poorly maintained in travel guides, but the highway has been improved during the last years. It is quite narrow and winding through the coast mountains for the first 20 miles, and Kayjay had to take a break afterwards, but we obviously aren't the only ones using the turnout for that. 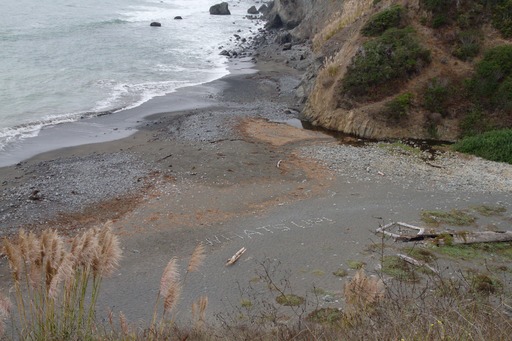 We intended to spend the night at Gualala, but I missed that the campground is closed after Labor Day. So we moved on to Bodega Bay, driving the supposedly most scenic section of the CA-1 in the dark. Bodega Bay RV Park is greatly overpriced, but nobody had the nerve to look for another one, so we stayed there for the night.

At least it is just a short distance from Bodega Bay to Point Reyes, but the street is quite narrow and bad, so I took over driving in Point Reyes Station. The good news about Sir Francis Drake Boulevard West of Inverness: they improved the road where I remembered it being very rough last time I was there. The bad news: every other stretch is now so rough it isn't really recommended to drive with large vehicle. The excellent point, however: this time, at last, the lighthouse was open. It's about 350 steps down the stairs from the former weather station to the lighthouse. 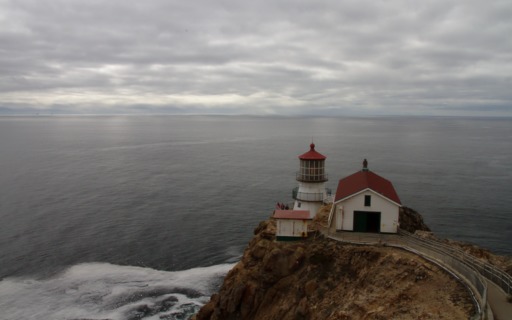 The ranger gave a detailed presentation about the it. It's apparently the only lighthouse in the US with the original lens and clockwork in the original building. The lamp of course was changed from oil to electricity at some point. The foghorn is automated these days, but still operating. 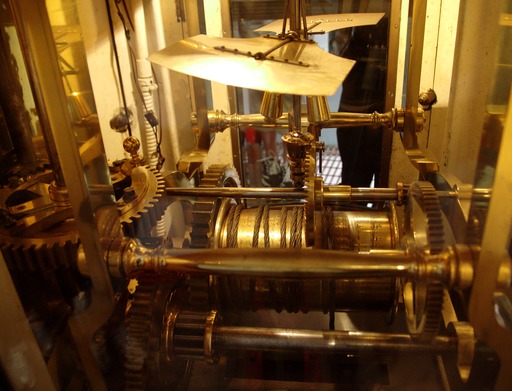 Remembering that the CA-1 is very narrow between Muir Beach and Tamalpais, I stayed on the Sir Francis Drake Boulevard in Olema. Admittedly, it is wider, but they still haven't fixed the settling of the street at some point and it is extremely rough. Shortly before the Golden Gate Bridge we got into a traffic jam, but made it to the viewpoints West of the US-101 just before sunset. Surprisingly, the road is now completely rebuilt, the viewpoints signed and paved, they marked parking slots, and on the upper end they built a roundabout suitable for tour buses and large RVs. Of course, this makes the former virtually unknown views quite well known now, losing a bit of their exclusiveness. But the view is still great. 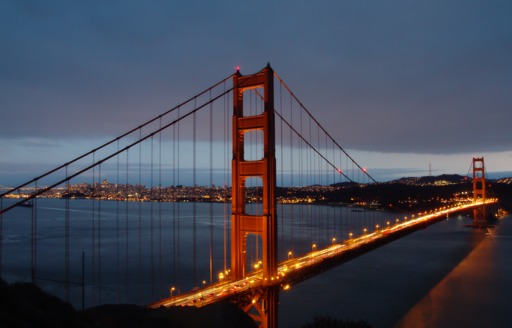 The traffic jam was gone when we continued our way to the last campground of the trip. Driving over the Golden Gate Bridge is always an experience, especially in the dark, despite heavy traffic driving through San Francisco was as smooth as always, and ignoring my satnav I did not end up in downtown as usual this time... It's strange, I know San Fran better than my hometown by now.

And I even got my In-N-Out burger on this trip, even though it meant driving in South San Francisco, which is something I clearly do not appreciate. The parking lot was overfilled, though, thus we parked at the nearby bank – we were short of cash anyway, because the gas station next to it doesn't take credit cards. As expected, the burger and fries were excellent. Also, on the same block there is a Krispy Kreme – is that place heaven or what?

But back on the road, for the last-but-one time, down the I-280 which I hate with my guts, even at night, but didn't miss the exit for a change, and to Candlestick Point RV Park. That place sure got expensive, the most expensive RV park on the whole trip. But there are only two commercial RV parks near enough to the rental station, the other one booked solid for months all year. The communal or state park campgrounds don't have warm showers, so Candlestick has a de facto monopoly in the region, and they know it.

We spent the night packing suitcases. Clean-up had to wait until the next day.

Cleaning we did, after getting up at six and heaving a short breakfast consisting of the remaining donuts, bread and cheese. We managed to be at the rental station at half past nine, as there was virtually no traffic on the way. We amazed the staff at El Monte with a clean (on the inside) RV, filled up gas tank and emptied black and grey water tanks. Apparently not everyone does that, but it makes them overlook small scratches to the veneer and the few small things we inevitably broke during the trip.

Zlatko wasn't there, but got to the airport in time thanks to the driver whose name I unfortunately forgot. The flight home on United Airlines was uneventful, except that we had to wait almost an hour at the gate for some baggage of passengers having missed their connection being unloaded and getting a new start slot, but the pilot made up the time completely. The machine was an older 747 without in-seat entertainment and tight space, worsened by the arsehole in front of me forcefully lowering his backrest so I couldn't move anymore. The cabin crew, however, was very friendly and helpful.

The train home was diverted from the long distance station to the regional station and missing one section which got added in Frankfurt main station, causing me to change seats three times. On the other hand, a seat reservation in this situation would have been worthless anyway.

Arriving in Nuremberg tired, my vacation ended. Would I recommend traveling with seven adults in one motorhome? Only if everyone knows each other well enough and is able to compromise. It is quite tight, but it worked for us. The main issue however is that with this vehicle only the two passengers in the driver cabin are having a good view, which makes it a bit boring for the rest on scenic drive with addition programming. Also, it takes quite some additional time to get ready for and after a stop. Not to mention that everyone has different expectations and wishes for the programming, finding a good mix between shopping, scenic drives and hikes is a bit difficult with such a large crowd. What I can say I'm glad we did it with one vehicle instead of two, otherwise it wouldn't have worked at all. But, with exception to Mount Rainier, my impression is that this route works best with a small group in a car or small RV.