And here's the solution to my small puzzle. It has something to do with rods, indeed. In fact, it is my first attempt at building a should support for large video camera. It all starts with purchasing materials (notably, aluminium profiles, screws, bolts rivets and tools):

The first step is to cut all the aluminium profiles into nice, handy smaller parts so they are easier to dispose... Just kidding. 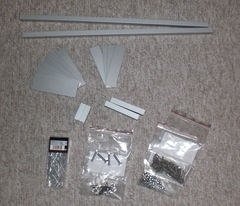 The main rails are 55 cm long, connected with the narrow plates to a rigid frame. The inner width of the frames is 10 cm. Within the frame, there are two adjustable sleds: one to carry the camera plate, one to place to shoulder on. These were constructed with the short rails and the wide plates. Here's everything marked and centre-punched: 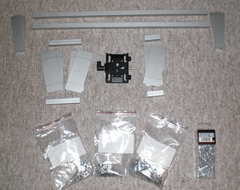 How do I secure the sleds on the frame? The idea was to have one (for the shoulder sled) or two (for the camera sled) M6 hexagon-socket screws to clamp the sleds to the rails. Alas, the rails are only 1 mm thick, a thread would tear quite quickly. I purchased a couple of L-type weld nuts, drilled some holes

and riveted (is that a verb?) them to the rails that carry the plates of the sleds:

(Never mind the machine screw I used for the photo)

The next picture shows the components with all holes drilled:

(Yes, I forgot the screws for the shoulder sled in this photo...)

As security nuts are for one-time use only, I did a test assembly with normal ones: 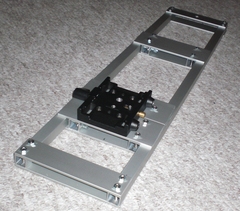 It worked quite well, however to properly secure the camera sled I had to fasten the screws so far that the main rails bend outwards. Not good in the long run. But the tests revealed that the camera plate slides wide enough that the sled could remain in one location most of the time. Holes (slightly smaller than M6) in the rail locks the screws (and the sled) properly without stressing the rails too much. Another discovery was that the shoulder sled doesn't really has any benefit that way. I was having a hard time stabilizing the camera both with and without it. Adding a plate in front of the sled solved that issue.

The final assembly, with the additional plate in place:

Still missing are a shoulder pad, and the counter-weights to compensate for the weight of the camera. Holding 3 kg of camera at half-arm length is quite strenuous in the long run. The construction (with the correct counter weight) could easily support a Betacam camera, but unfortunately the frame is too wide for my significantly smaller camera. I'll probably build a smaller version of this support, but only after some experience with this version. For a first-time project it turned out quite well, I think.