In the morning, F_u_r_v_a_n tried to find a certain Toys'R'Us, but we only found a different one. He still got the Nerf gun he was looking for, though. 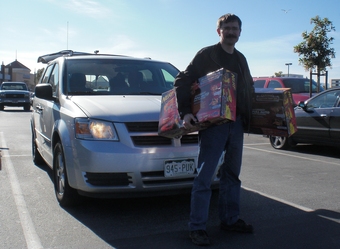 We then proceeded to downtown San Francisco and went shopping and cable car riding. The book stores are drastically reducing their selection, less and less CDs and DVDs are available from retailers, and China Town shops now close between 7:30 and 8:00. On the positive side, the quality of China Town stores increased even more, which is a good sign.

Is this the recession? Less good, higher prices, closed shops?
How do prices compare to previous years, and to Europa?
How's the mood of the people?

People are concerned, but not scared. The general attitude is that these likely aren't good times and that it'll take a while for the economy to recover. There is a subtle hint of collective bad conscious that they might have overdone their style of life, but I hardly heard anyone blaming a specific party like banks or politicians.

Some prices went up. Clothes appear to be more expensive, soft drinks as well, but I didn't compare receipts with last year. A lot of shops are closing, especially small retailers. Of the department stores, Mervyn's broke down last year, Macy's reportedly is closing subsidiaries. Of the book stores, Borders Books seems to be in trouble and Barns and Noble (though reportedly still doing well) significantly reduced the range of products, at least in the store we visited.

A closer look at the affected companies indicates that these weren't doing well even before the economic downturn, and the current situation finally breaks the camel's back.