During the RV trip this year I found out that while the Navilock 320U gives excellent results, the lack of any logging features requires to have the laptop running all the time. As my mother likes studying maps, I strapped the PowerBook to the folding table of the third passenger seat and had gpsdrive running on it. But this only works if you have enough space in the car. Also, the plug of the power converter fell out of the socket at Grand Canyon without us noticing. This resulted in a gap of 80 miles in the recording after the battery ran out.

I intended to take the Geko for recording the hikes. However, in most cases I simply was too busy to collect the other gear, like hiking boots, hiking poles, camera, cap, jacket, ohwaitaminute I forgot the water... And where the heck to put the Geko? The thing is too large, complicated and slow for just geotagging photos.

There must be something in between. A simple and small device that can log data and can be attached to the camera belt. Does not need navigation functionality, but should be fast and accurate. Fortunately, these GPS data loggers became very popular a year ago, and they are quite inexpensive now. I decided to purchase a Holux m-241 with an MTK GPS chipset.

It runs on a single AA battery for ten to twelve hours and has 2 MB flash memory, enough to store approximately 130,000 track points. The accuracy is slightly worse than the USB receiver, but still quite good: 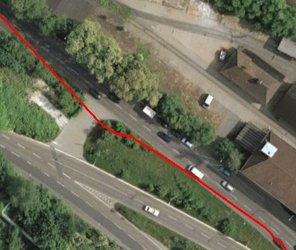 The device logs one position per second. You can set it to log with millisecond resolution of the timestamps, but the fraction is always zero. Unlike with the Geko, the time difference between two samples is really (very close to) one second.

What's more interesting is a comparison of the fixes in a slow-moving or parking vehicle: 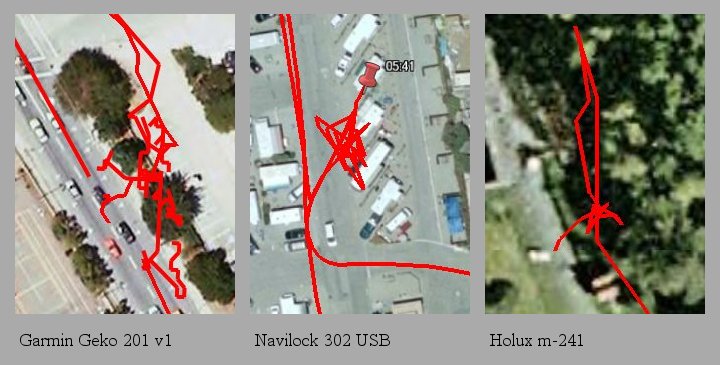 The right line to the north in the Holux example is actually correct, the left one should not differ that much, though. Only few of the positions in all three examples correspond to actual movement, though. Even though the three cases aren't directly comparable, it shows that the Holux gives the best results in this situation.

Though it is far from being perfect:

Both visible tracks should be on one line. The terrain is quite difficult, though: a very tight valley in a hilly environment, the trail under large wet beeches, the GPS logger dangling on the zipper of the jacket.

Conclusion: originally purchased to be strapped to the camera belt for geo-tagging of photographs, the Holux m-241 is certainly good and powerful enough to record tracks on shorter roadtrips as well. I won't decommission the Navilock, and certainly not the Geko, of course. These three devices and my TomTom PNA perfectly cover everything I want to do with GPS reception.