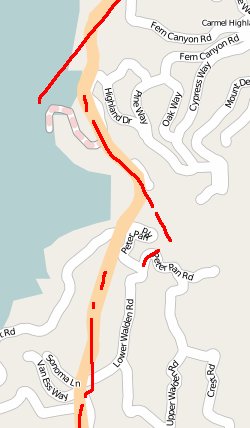 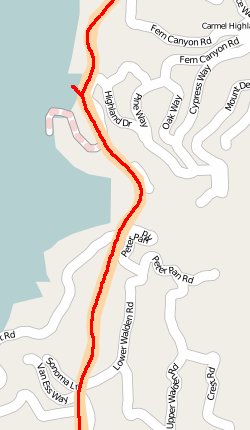 Navilock 302U receiver
The example shown is near Carmel-By-the-Sea, CA. The Garmin Geko 201 was lying on top of the dashboard all the time, while the Navilock 302 USB receiver was attached to a lamp on the passenger side inside the RV. Both tracks have been filtered to remove the most extreme errors, otherwise you probably couldn't even make out the track with the Geko. Google Earth, at least, just draws insane nonsense when fed with the unfiltered data. Still, the Garmin device is severely off-track in difficult terrain. Both receivers seem to suggest that we drove off the cliff at the vista point, which of course we did not. 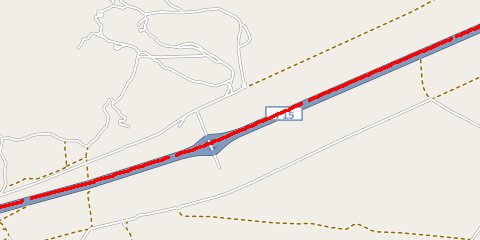 And finally, either gpsdrive or the Geko logs imprecise timestamps. I get a log entry every second, but the real sample rate (of "fix rate") varies between 0.5 to 1.5 seconds, according to the observed speed between (good) samples. I need to check whether the NMEA output of the device gives microsecond resolution, but if I remember correctly it does not.

The Geko 201 is a very nice device for hikes in not too mountainous environments. But its chipset shows its age and isn't suitable for data logging on roadtrips. To be fair, it wasn't built for that anyway. The Navilock 302 on the other hand gives excellent results, but it does not have any built-in data logging functionality or navigation support.

Lots of battery powered units designed for hiking conserve power by cycling off the GPS for 95% of the time, then turn it back on every couple of seconds. At foot speeds, this is no big deal and the chipset knows approximately when to expect the next GPS signals. But if you are moving too fast, the signals arrive at different times than expected and the chipset must widen it's arrival window for the next check a couple of seconds later. This isn't an issue at foot speeds, but causes gaps when moving 40mph or so.

Gps systems suck power - if they didn't turn it off and on like this, a hiker's battery would be depleted within 2 hours.

Thanks for pointing this out. If you log on battery power the results get even worse. In this case, the device was running on external power and shouldn't clock down. "Auto" mode was also disabled.

I can imagine a couple of reasons for the poor performance of the Garmin device: the processor used by the Geko is apparently quite slow and depending on the code path calculating the position can take different amounts of time. Of course, a stronger processor would need more energy. Also, it uses only up to four satellites for calculation. Finally, the receiver circuit is not as sensitive as newer designs.

The Sirf III chipset uses up to eight visible satellites (if I remember correctly) for calculation, is capable of estimating the actual time of the fix regardless how long the calculation took, does some really good inter- and extrapolation of the data and has an excellent receiver circuit. Judging from my TomTom PNA it would drain two AA batteries within 2 hours. The comparison to the Geko is a bit unfair, indeed.

I have a new toy, though, and it is more appropriate to compare the Geko 201v1 with that one. More about it in part 2 ;-)