We rented a 31 ft motorhome suitable for 8 passengers from El Monte. I wouldn't recommend to occupy it with 7 adults like we do, unless everyone involved can cope with the limited space and privacy. So far (after one day, I have to admit) it works out very smoothly and with way less hassle than with coordinating two RVs.

The only downer is that there are two rental stations in the Seattle area: one is in Seatac (the airport area between Seattle and Tacoma), the other one is in Ferndale, actually closer to Vancouver and a hundred miles away from Seattle. You can only book the later from a German travel agency. So we rented a large van, Lynard drove us to the RV rental station, we picked up the RV, Lynard and Kayjay brought back the van to Bellingham airport, and we picked them up again.

First shopping took way too long, some time last year Walmart apparently changed the layout of its stores. I never really liked them, but running around the shop for two hours trying to guess where the f... even the most basic articles are really pissed me off.

We arrived at Cougar Rock Campground, Mt Rainier National Park, at half past eleven in the night, properly stored our luggage and groceries, and set up the beds.

Mount Rainier, apparently pronounced "mount rainy-er", is with 4300 meters the highest mountain South of the Canadian border. This pronunciation is appropriate: we took the hike to Panaroma Point in dense fog and only when we arrived at the highest point of the Skyline Trail the sun came out and we had a wonderful view at the peak of Mt Rainier, the glaciers and the valleys. 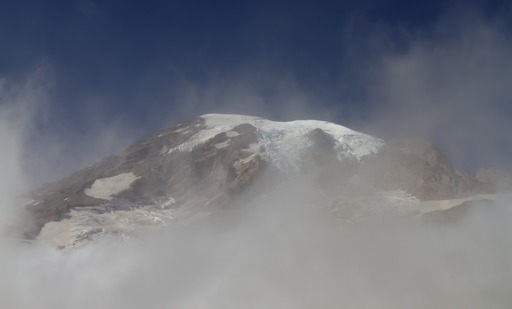 Though it was cold and wet (or maybe because of it) we saw deer, squirrels, marmots, grouse, and various songbirds. 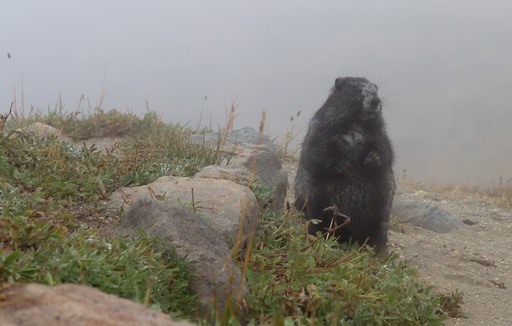 Marmot in the Fog

The hike is listed as strenuous, with an elevation difference of 530 meters, but was fairly easy for us to handle.

After a cold night, as we forgot to turn the heating on, we started relatively late for an easy forest hike along the Paradise River to Madcap Falls. 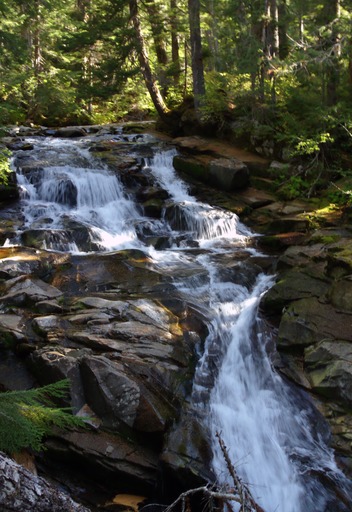 Afterwards, we hiked along Kautz Creek trail up to the point where the trail crosses the creek, or whatever is left of it after the river rerouted due to a landslide a couple of years back. A very nice and relaxing hike nevertheless.

But enough of the Cascades, off to the coast at last!